EGRG is proud to celebrate the achievements of two intellectual heavyweights in Economic Geography, who have been awarded Royal Medals by the RGS-IBG as part of a series of awards honouring top geographers. The Society’s prestigious medals and awards recognise extraordinary achievement in geographical research and the promotion of geography, science and discovery.

Ron Martin, Professor of Economic Geography at the University of Cambridge, has been awarded the Victoria Medal for 2016 ‘for outstanding contributions to the field of economic geography, especially with respect to advances in regional economic development theory’.

Michael Storper, Professor of Economic Geography at the London School of Economics and Political Science, received the 2016 Founder’s Medal for scholarship and leadership in human and economic geography. His research work focuses on contemporary forces of globalisation, technological development, and industrial change.

This is excellent news for the international Economic Geography community, and a clear reflection of the major strength, vibrancy and impact of research in our field.

This year received a record number of entries to the competition, and this is an encouraging sign of vitality in Economic Geography in the UK. All entries were of a very high standard and the EGRG committee is pleased to announce that this year’s winner is Erica Pani, Queen Mary, University of London for her thesis entitled:

‘Emerging Economic Geographies of Higher Education: A Complex Negotiation of Value and Values in the Face of Market Hegemony’.

We also wish to award a Runner-Up prize to Matthew Alford, University of Manchester for his thesis titled ‘Public governance and multi-scalar tensions in global production networks: crisis in South African fruit’.

The EGRG is pleased to announce that it will be supporting two PhD students to attend the Summer Institute in Economic Geography at Kentucky University this summer. Kelly Kay from the London School of Economics and Amy Horton from Queen Mary University of London have both been awarded £175 towards their travel costs. Reports on their time at the Summer Institute will be made available at the end of the summer.

Lizzie Richardson was awarded an EGRG Travel Grant to attend GCEG2015.  Read about her experiences below…

On home territory? Getting (dis)orientated at the Global Conference on Economic Geography, Oxford, August 2015

In trying to capture a sense of my experience of the above conference now some months past, I can’t help but come to rest on ‘disorientation’ as a suitable descriptor. Despite the conference taking place in the UK, and in the facilities of a university not unlike the one where I am currently based, for me there was something a bit queer about the event.

I use the term ‘queer’ deliberately.

This is because my sense of disorientation picks up Sara Ahmed’s Queer Phenomenology in which she considers how questioning orientation, and getting lost, can help us find direction. And as someone more schooled in ‘cultural’ matters, this conference was something of an outing into what was for me the under-charted territories of economic geography.

This process of disorientation to reorientate myself at the conference involved queer encounters with the subject matter of economic geography. Some of this was through engaging with completely new areas for me, for example aspects of ‘financial economies’. Equally it involved becoming attuned to different vocabularies to describe topics with which I am familiar, such as ‘work economies’.

But as well as querying my own position, this sense of disorientation was in operation in the subject of the conference itself. Perhaps unsurprisingly, far from being homogeneous research matter, economic geography proved to have incongruities and heterogeneities. There were lots of different speaking positions, some of which seemed to be more receptive to entering into dialogue than others.

This heterogeneity was the subject of Jamie Peck’s keynote address at the opening reception, held in Oxford’s Museum of Natural History. Known to have a fondness for allegory, he borrowed the classification of the scholarly ‘lumpers’ and ‘splitters’ who differently construct natural history, and applied these academic types to the production of knowledge in economic geography. As someone with a cultural ‘predilection’, I enjoyed Peck’s lecture for its thoughtful construction, but was also drawn to his assessment that economic geography is yet to properly respond to the ‘post-structural’ challenge, posed some twenty years ago by feminist economic geographers.

Another notable point when incoherence and uncertainty around speaking positions emerged was in the final plenary, the topic of which was ‘global encounter, pluralism and transformation in economic geography’. The session was constituted by a discussion between Britta Klagge, Jane Pollard and Henry Wai-chung Yeung, chaired by Gavin Bridge. As well as providing some interesting bits of academic life history for each of the panellists, the session contained some thought provoking discussion about the challenges of ‘doing’ economic geography, and of ‘being’ an economic geographer.

And in this reflexive light, thinking through Sara Ahmed reminds me of the importance of being receptive to queer orientations. To allow for plural approaches in economic geography means being willing to see things differently. Or for Ahmed, to extend the parameters of the visible and the sayable involves disclosing work, when the things in front of us that allow us to find our way, can also conceal other directions. Such a question of what falls within the parameters of economic geography, and what economic geography might obscure, was evident in the ‘digital economies’ stream.

Perhaps an unfair (and not to mention biased) comparison, but I felt the topic matter open to discussion was much broader in the panel (in which I participated) on the ‘sharing economy’ than much of the content of the digital economies plenary session. Nonetheless, in both sessions, what was interesting was the struggle to find a vocabulary for ‘digital economies’ that might do justice to overlaps with and departures from existing theoretical and empirical work in economic geography.

Overall, and including the usual conference cocktail of overstimulation and sleep deprivation, I thoroughly enjoyed my outing at the conference. I am grateful to the Economic Geography Research Group of the RGS-IBG for their travel award. 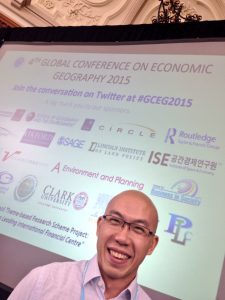 Many congratulations to Dr Aidan Wong who has been awarded the Economic Geography Research Group 2015 PhD Prize for a thesis entitled:

Aidan completed his PhD in the School of Geography at Queen Mary, University of London.  He is now a Postdoctoral Research Fellow in the Department of Geography at the National University of Singapore.  Aidan’s thesis also won the 2015 PhD Prize in Economic Geography awarded by the Association of American Geographers.  We understand that this is the first time that someone has won the double in this way!

The EGRG prize judges commented on the highest standards of scholarship and academic attainment evidenced across this year’s entries, and look forward to judging the next round (calls for entries to be announced later this year). 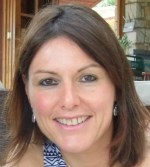 After 3 years of hard work as Chair of EGRG, Alex Hughes stood down at the August 2015 AGM in Oxford, at the Fourth Global Conference in Economic Geography.  She is succeeded by James Faulconbridge.  Many thanks to Alex, and good luck to James!

In the Business of Economic Geography

Recent years have witnessed a noticeable migration of economic geographers from Departments of Geography (or Geography programmes more broadly defined) to Business and Management and related research centres.

The aim of this research project is to assess the scale of this trend and its broader implications for teaching, research and capacity building in Economic Geography, and its consequences for Human Geography in the UK.

Check out the project webpages for more detail: www.egrg.rgs.org/business-of-econ-geog

This project is financially supported by the EGRG and RGS-IBG and focuses specifically on UK Economic Geography in the first instance.

Many congratulations to Yasmin Merican at the University of Edinburgh who has been awarded the Economic Geography Research Group 2014 Prize for the best undergraduate dissertation for a study entitled:

‘All food is ethical: exploring the negotiation of everyday ethics and ethical food’

There were eight entries this year and all reflected the highest standards of scholarship and academic attainment.

New for 2014, the EGRG Undergraduate Dissertation Prize is sponsored by Sage. Yasmin receives a copy of Global Shift, The Sage Handbook of Economic Geography, and a further £150 worth of Sage books.

The Fourth Global Conference on Economic Geography, titled Mapping Economies in Transformation, will take place in Oxford, UK, on 19-22 August 2015. Building on the success of previous global conferences held in Singapore, Beijing and Seoul, the Conference is expected to attract hundreds of scholars with the objective to foster interdisciplinary worldwide dialogue on the state of the art and the future agenda of economic geography.

Key themes of the conference will include: consumption, digital, emerging, financial, green, innovation, labour, political, resource, regional, social, and urban economies, as well as epistemologies for understanding the world in transformation.

Announcement made on behalf of:
Professor Dariusz Wojcik <dariusz.wojcik@spc.ox.ac.uk>
School of Geography and the Environment
University of Oxford

This hugely successful workshop took place on the day before the 2014 annual international conference of the RGS (with IBG). It brought together academics, including postgraduates, from across human geography to facilitate a critical focus and debate on the nature and implications of research impact, from research group perspectives across the discipline, including thinking more broadly and critically about what research impact means to us, and how it affects our work. The event included group and roundtable debate, facilitated by five keynote talks.